10 Best Anime Like “How Heavy Are the Dumbbells You Lift?”

10 Anime Like How Heavy Are the Dumbbells You Lift?

How Heavy Are The Dumbells You Lift? is a fun and energetic Summer 2019 anime with a score of 7.55 according to myanimelist, about a teenage girl named Sakura Hibiki  with a voracious appetite. Noticing her clothes tightening in lieu of her slowly expanding waistline she decides to look into enrolling in the nearby gym. There she runs into a girl from her grade named Souryuuin Akemi.

Akemi, who has a muscle fetish tries to get Hibiki to enroll in the gym despite its high ratio of macho men. Thankfully a beautiful trainer, Machio, appears and unknowingly convinces her to enroll and start her quest to a great body.

Are there other anime like How Heavy Are The Dumbbells You Lift? You bet there are!

we gothered for you here the 10 best anime like How Heavy Are The Dumbbells You Lift?  that worth your time

Grand Blue is an anime about a college diving club that spends most of its time drinking, partying, and hooking up. Just like in How Heavy Are The Dumbells You Lift?, the show offers a combination of educational depictions of people participating in a physically intense extra-curricular activity with the characters fun-filled every day lives. What’s more, both shows don’t hesitate to show off their characters assets, whether that’s their abs or their chests.

K-On! is one of the classics of the “cute girls doing cute things” genre of anime. While How Heavy Are The Dumbells You Lift? has a bit more fan service than can be expected from shows like K-On!, it still fits into the genre. K-On! focuses on a group of girls who are starting a rock band. Some of them are already pretty talented, while others are learning to play music for the first time. That’s the same general set-up of Dumbell – just replace music with working out.

One of the most fun things about How Heavy Are The Dumbells That You Lift? is Akemi’s obsession with bulging muscles. She isn’t the only anime character to display such a passion. Another example is Gou Matsuoka, the team manager for the Iwatobi Swim Club of Free! That’s actually her motivation for being part of the team in the first place – it’s the only way she’ll get to see all those sweet rippling pecs.

4| Wanna Be the Strongest in the World

While Sakura Hibiki isn’t competing with anyone but herself and isn’t involved in anything quite so dark as vengeance, she does find herself in a whole new world of working out that doesn’t suit who she thinks she is, but ends up becoming one of the best things she ever did.

But if for some reason you haven’t seen it, it’s definitely worth a watch. The characters are just as dedicated to their sport as Hibiki and Akemi are to working out… there’s just also a lot of fan service.

Read about: Top 10 Anime Where MC Is Unemotional And Careless

10 Best Anime Like “If It’s for My Daughter, I’d Even Defeat a Demon Lord” 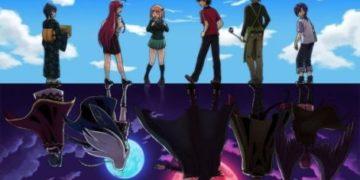 Isekai Anime List of the best Anime Series Where The MC Comes To Earth From Another World here is an...