lets dive in this sci-fi world of this harem anime series that follows Yuuki, who  is a high school boy, struggling and bumbling to confess his love to his dream girl, Haruna Sairenji.

The various daily obstacles he encounters are not helpful at all.

Upon returning home and sulking in his bathtub one day, he finds his hands full with the breasts of a mysterious girl nude girl who popped out of nowhere!

Coming from the planet Deviluke, Lala is heir to the throne.

The father of this beautiful princess wants her back in their home planet for a fixed marriage, but she insists on marrying Rito in order to stay on Earth, where apparently accidental groping meant the engagement tradition of the other planet!

Another obstacle for Rito in winning the love of his life, that is, if Lala doesn’t win him over. This Harem romance Anime show depicts the story of Kodaka Hasegawa a friendless schooler, who transfers to a new school, where he wants to make a positive impression, and maybe even some friends.

However, Kodaka discovers he is out of luck when he is seen as a violent delinquent due to his blond hair and intimidating expression.

However, his life changes when he finds Yozora Mikazuki talking to her imaginary friend in an empty classroom.

After sharing stories of their lonely high school life, Kodaka and Yozora decides to overcome the issues of making friends by creating the Neighbor’s Club.

The club activities focus on learning social skills and how to fit in, which will allow them to make friends.

Hence, some eccentric outcasts, strats to join the club. and odaka may finds people he can call friends.

One of the most original harem anime series that i really enjoyed, the of this animated series story revolves around Keitaro Urashima, who made a childhood promise to a girl that they’d attend Tokyo U together.

Unfortunately, he ranked extremely low in the National Practice Exam, so his resolve was to stay at his grandmother’s hotel while continuing his studies.

Little did he know, the hotel had been transformed into an all-girls dormitory, and now Keitaro’s become the manager!

So, How will he manage to focus on his studies, nonetheless his promise when he’s living with 5 other girls? This ecchi harem anime takes place in the future, where humans are under siege by an alien race a.k.a Novas.
These aliens leave devastation in their wake whenever they appear, with the efforts to stave them off becoming known as Nova Clashes.

Girls “Pandoras” and Boys “Limiters” are implanted with stigmata to give them superpowers and are trained in military academies, where they learn how to work as a team if humanity is to have a chance of surviving.

Freezing focus on Kazuya Aoi as debut his first day at the West Genetics military academy, right when a battle royale is being undertaken by the Pandoras.

However, he mistakes a powerful Pandora known as the “Untouchable Queen”—as his deceased sister and embraces her.
Hence, Though he costs her the match, she finds that his touch doesn’t drive her away and decides to take him as her Limiter.
So, The only question is whether or not they can survive the machinations of their upperclassmen and the impending 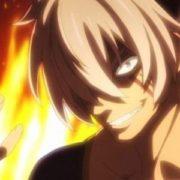 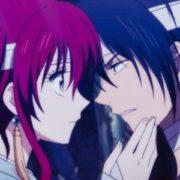