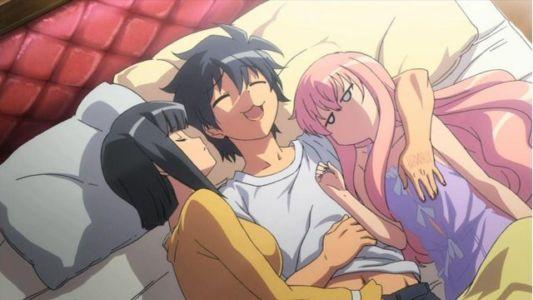 Harem Anime Series Where the Main Character is Overpowered:

Let’s highlight some of the best harem anime with op mc, that are filled with beautiful girls, while the main character is overpowered, bad-ass, and cool.

keep in mind that this list is mingled with various anime genres such as romance, magic, action, fantasy, and much more themes that are really enjoyable.

so with no further ado; Here We Go! 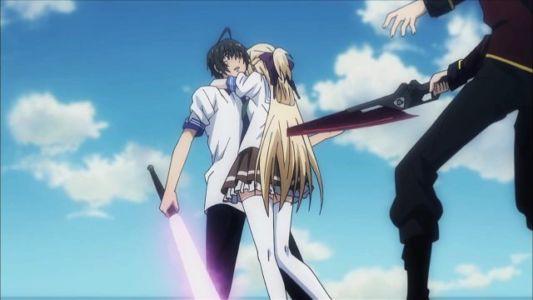 One summer morning. On his way to kendo practice, Takeshi meets an unconscious girl with a uniform he doesn’t recognize. Takeshi saves her, and in return, the girl wakes up and accidentally turns him into a magic user. As a result, Takeshi figures out, that there are two worlds: the one he lives in and the other of magic users.

Moreover, Magic users aim to live peacefully with non-magicians, but there are some with bigger ambitions. Takeshi and his newly magician friends Kurumi Isoshima and Kazumi Ida decide to enroll in a Magic Academy as well.

Hence, the three friends have different reasons for fighting, whether they’re fighting to leave their past behind or catch up to the future. Chased by the Ghost Trailers, the three friends must do their best to become stronger, face the leader of the Trailers, and prevent the beginning of the Second Great Magic War. 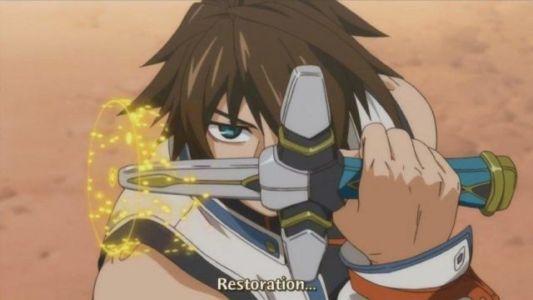 In a post-apocalyptic world, that consist of beasts, humans lives in large mobile cities a.k.a Regios, and learn to use special weapon. In the Academy City of Zuellni, Layfon Alseif is hoping to start a new life and forget his past. However, his past has caught the attention of Karian Loss, the manipulative Student Council President, and Nina Antalk.

Furthermore, a Military Arts student and Captain of the 17th Military Arts Platoon instantly recognizes his abilities and decides he’s the perfect candidate to join her group. However, with a secret past that won’t leave him alone and unknown powers beyond normal, Layfon just might not take it. 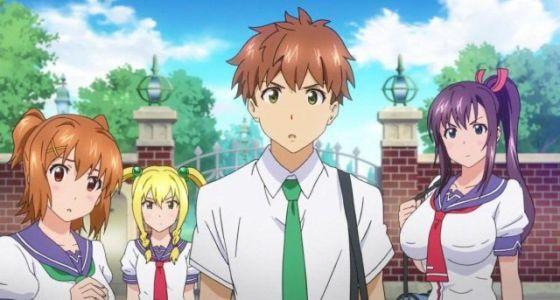 Unfortunately, his dreams of happy high school life are dashed when he finds out the school is much more than it seems. All of the students wield a special item—a Maken—to unleash their magical abilities in duels!

So, Can Takeru find a Maken that works for him? Even while trying to fit in at a new school and dealing with all kinds of girl problems? 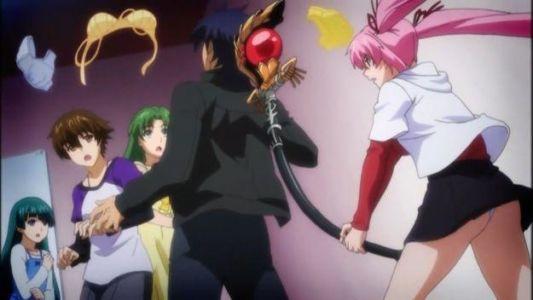 This is an amazing action harem anime led by the overpowered main character Akatsuki Ousawa, labeled the “Rogue Hero,” who left his peaceful life in the fantasy world Alayzard to stand up against new tasks upon returning to the real world. He returned to earth with a girl named Miu, who is the daughter of the Demon King he defeated, and he must hide her from society by pretending she is his little sister. The two will starts attending a special school for those who have acquired superpowers through their journey to a fantasy world.
Babel was seemingly founded to train young interdimensional travelers and “guide them to the right path for the sake of humanity and themselves,” but its true purpose remains unclear to the siblings. Will Akatsuki and Miu be able to overcome the hostile, powerful student council and uncover the forces at play behind the scenes? 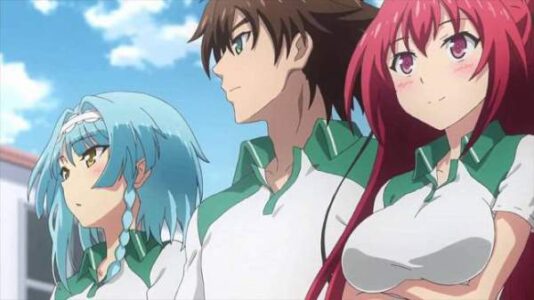 “Hey, you said you wanted a little sister, right?” First-year high school student, Toujo Basara, his father suddenly asked him and fell into a state of panic.

On top of that, the eccentric father tells him he will get remarried. He then departs overseas after bringing Basara two beautiful step-sisters. But Mio and Maria’s true forms are actually the newbie Demon Lord and a succubus!?

Read Also: 10 Best Anime Where MC have a Hidden Power 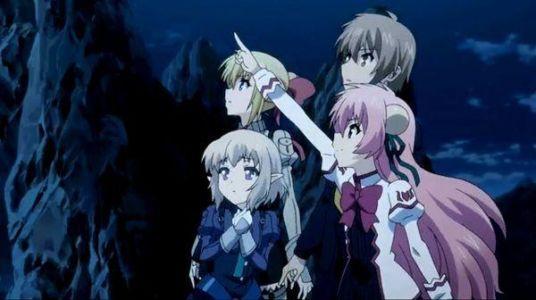 At Ansarivan Dragonar Academy, Riding and taming dragons comes easy to most students. However, this task is not easy for first-year student Ash Blake, who is known for being the “number one problem child.”

The whole school laughs at the poor Ash, because despite he is a candidate to be a future dragon master, he has nothing to show for it. as His dragon has never appeared. Therefore, One day, Ash’s dragon appears in full glory, but seems different than any dragon ever seen before, believe it or not, he is a dragon is in the form of a beautiful girl!

What’s worse, Ash soon discovers that this new dragon has an attitude to spare, as she promptly informs him that she is the master, and he, the servant. So in this harem anime, the main character’s problems with dragon riding, and becoming op and strong have only just begun. 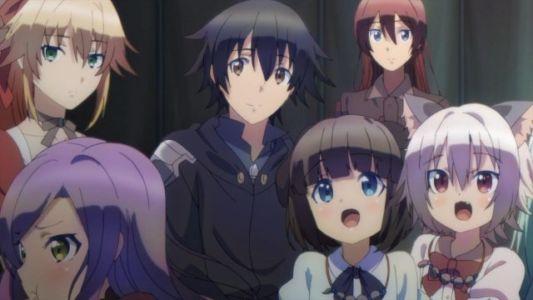 Ichirou Suzuki, a programmer nearing his thirties, is drowning in work. Worn out, he eventually has a chance to catch up on sleep, only to wake up and discover himself in a fantasy RPG world which is mashed together from the games he was debugging in reality. In this new place, he realizes that not only has his appearance changed into a younger version of himself, but his name changes into Satou.

However, before Satou can fully grasp his situation, an army of lizardmen launches an assault on him. Forced to cast a powerful spell in retaliation, Satou wipes them out completely and his level is boosted to 310, effectively maximizing his stats. Now, as a high-leveled adventurer armed with a plethora of skills and no way to return to reality.

The anime story follows the overpowered main character Satou who is surrounded by a harem of cute girls while setting out to explore this magical new world. 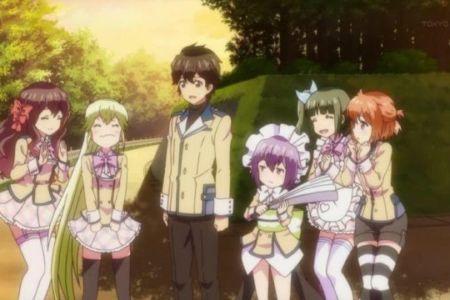 The Story of this harem anime Focuses on the main character Hatate Souta is a high school boy, who is overpowered and blessed with a superpower, that allows him to visualize future events Flags, such as the “death flag,” “friendship flag,” and “romance flag.”

Although Souta possesses this amazing ability, he often avoids getting close to others or making friends, due to a trauma he experienced in a ship submergence accident. Therefore, he will be surrounded by Twelve beautiful girls who are interested in his strange way of living, and they begin to live with him at the school dorm. 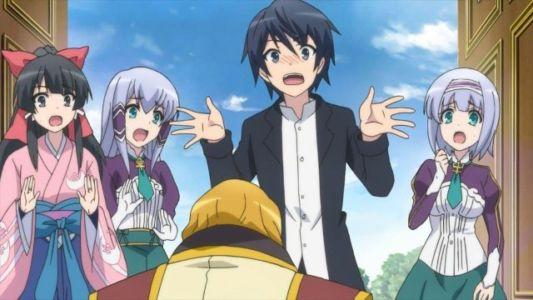 Touya Mochizuki accidentally got struck down with a stray bolt of lightning! Hence, As an apology, he is offered one wish and the chance to live in another magical fantasy world. Touya accepts the offer, and his only wish is to keep his smartphone with him as he starts his adventure into this fantasy world.

So, Touya Starts over his life in this magical world, while some pretty girls vie for his attention. Therefore, These cute girls will provide Touya’s life with endless romantic frustrations, but also companionship as he discovers the mysteries of this fantasy world. 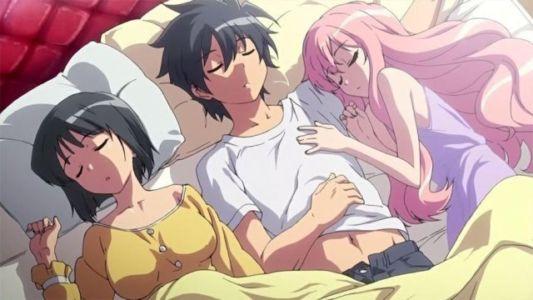 Louise Françoise Le Blanc de La Vallière is a mage in a world of wands, cloaks, and royalty. Although she studies at Tristain Academy, a prestigious school for magicians, she has a major problem: Louise is unable to cast magic properly, earning her the nickname of “Louise the Zero” from her classmates.

When the first-year students start performing a summoning ritual, Louise’s summoning results in a catastrophic explosion! Everyone deems this to be yet another failure, but when the smoke clears, Saito Hiraga appears. Now Louise treats her familiar Saito as a slave and forces him to clean her clothes and eat off the ground.

But when Saito’s hand starts etching from the summoning ritual. rumors have it to be the mark of a powerful familiar named Gandalfr. Wild, adventurous, and explosive, Zero no Tsukaima is an amazing harem anime with an overpowered main character who is always ready to unleash his Power to Save his Lover.

You can Watch these Anime Series at Crunchyroll , Anime-Planet,  Animelab