here is a good action romance anime series which depicts an era where Great advancements in technology, helps mankind to create human-like robots that act as public and personal servants for society, Unlikely, the nice high school student Arato Endou treats these robots as equals, but he he cant afford to own a one.

However, his normal life changes dramatically when an ordinary run to the local grocery store goes horribly amiss.

Viciously a hacked robot attacks Arato, and he is on the verge of death;

but luckily, another abnormal robot saves him.

this human-robot name is Lacia, one of five highly advanced robots that recently escapes the clutches of the mysterious MemeFrame Corporation.

Lacia in exchange for saving his life, asks him to register as her new owner, thus taking full responsibility for her actions.

With no choice left, he decides to trust this robot girl and allows her to live in his home. 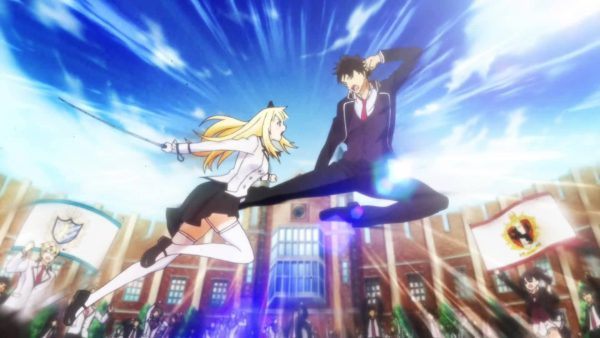 The story follows Persia and Inuzuka who are the leaders of their respective dorms at Dahlia Academy Boarding School.

Persia and Inuzuka are secretly loves each other.

But, they must keep their relationship a secret from other dorm mates while trying to avoid trouble.

The Story of this action school romance anime Follows the idiotic Issei Hyodo,  After being killed on his first date.

The resurrections of Issei by a Pretty demon Girl “Rias Gremory”, Comes with a price!

Hence, Rias Recuits Issei into her club of high-class devils.