What are the best Hollywood movies that are inspired by Japanese anime and manga?

Hollywood movies inspired by anime and manga: Well, Japanese anime and manga had already made it into the Hollywood industry several times but probably you didn’t hear of them.

So, today you gonna uncover the truth behind some good Japanese anime movies or series that inspired and influenced countless great American Hollywood movies like inception, Fast & Furious, and Matrix.

Even though no one wants to admit it but in the end, those movies based on anime confirm that you are not putting your love in the wrong Place!

So, if Japanese anime & manga are your sole loved medium, take a look at this list to see their big influence on American directors and how they have been able to remake some good Hollywood blockbusters out of the Japanese culture.

With no further ado, here are the 15 best American Hollywood movies inspired by anime:

Requiem for a Dream – Perfect Blue 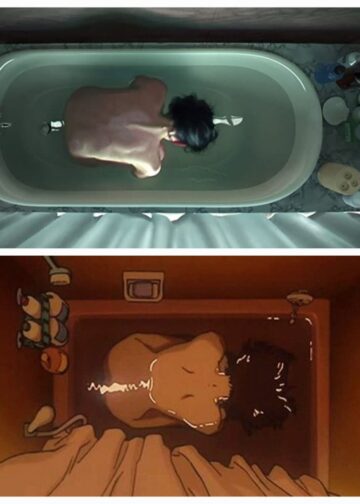 Kicking off the list of the best Hollywood movies inspired by anime and manga with Requiem for a dream. Everyone knows that this American film used scenes from Satoshi Kon’s Perfect Blue anime movie. Moreover, rumor has it, that the director Darren Aronofsky had purchased the copyrights for making a remake of the Perfect Blue movie. However, he later mentioned that the project was canceled due to multiple causes. Therefore, Daren also stated it was an honor that his movie Requiem for a Dream has similarities with Perfect Blue animated movie in terms of angles and shots. 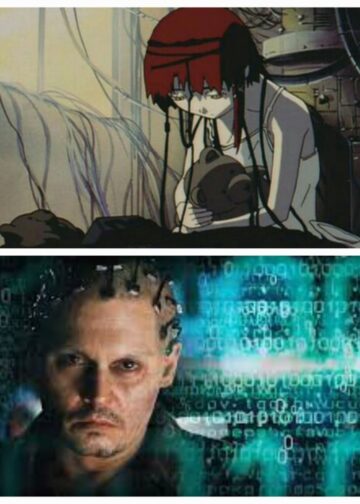 From the synopsize of Transcendence, it is obvious that this film uses the same setting as that of the Serial Experiments Lain anime series. Therefore, this is among the best Hollywood movies that are inspired by anime.

Transcendence’s story highlights the wife of the main character Will, who in order to save her husband, ends up uploading his consciousness into a quantum computer. As a result, will soon start making groundbreaking revelations but also shows some signs of dark and mysterious reasons.
In Serial Experiments Lain, the main character’s life will turn upside down when an email leads her right to the Wired, a VR world of communication networks similar to today’s internet… With the portals starts blurring between reality and cyberspace, Lain is dragged into supernatural and bizarre things where the concept of everything takes on new meanings.

Clash of the Titans – Saint Seiya 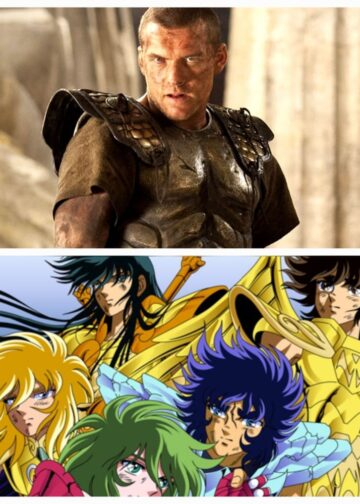 In an interview, The Clash of the Titans’ director Louis Leterrier, stated that he is in love with the Saint Seiya anime and manga series. So as a tribute to his beloved series, Louis particularly revealed that the armor that the Gods wear in his movie is derived from the character’s design of Saint Seiya’s character. Furthermore, the production team of Clash of the Titans film has even asked Masami Kurumada for a collaboration to create the banners designs. 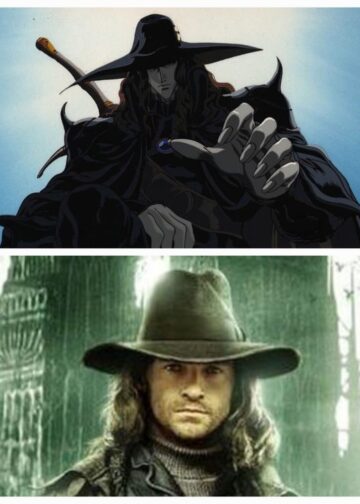 Well, everyone knows that Hollywood has produced so many movies about vampires, and so do anime creators too. We can’t really say the Van Helsing is actually derived from the anime series Vampire Hunter D or Helsing ultimate. However, if you take a look at the costume that the main characters wear in both films, you will come to know that they are so similar. The film’s team has never revealed anything related to getting inspired by that Japanese anime, but many fans have stated it in many reviews and comments. 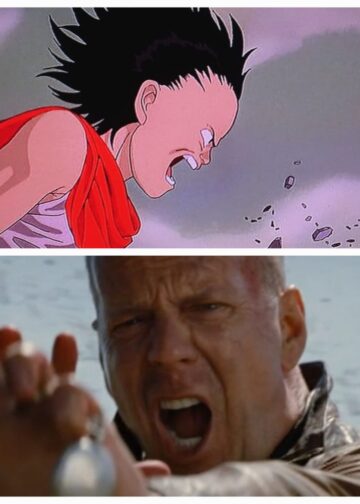 There are so many American Hollywood movies that as an inspiration uses themes and styles from The Akira anime movie. One of those films that were influenced by Akira is Looper, and one of the best similarities is the scenes in the movie Looper with the kid Cid that reminds us of the powers that Tetsuo gains.

Looper takes place in a futuristic world, where a gang sends their victims back in time to put them to death by the loopers. The main character Joe is one of those loopers who will find himself to be the victim of his own actions.  Looper’s director Rian stated that he was influenced by stuff from Terminator to Akira.” and that he shot Scenes in Looper using Akira as an inspiration. 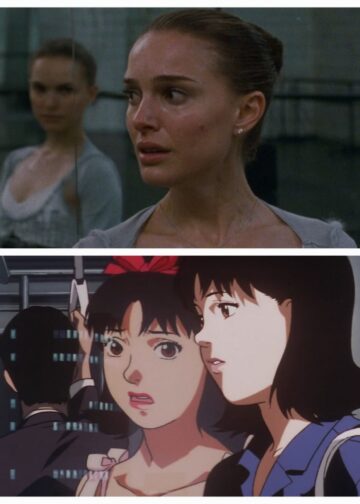 Black Swan doesn’t follow the exact same plot as Perfect Blue but there are striking similarities. Both stories feature a troubled protagonist. But when you watch the two shows you really see big similarities in both those psychological thrillers.

Moreover, Aronofsky has already categorically denied that claim. But wait! why in both movies, the young, innocent protagonist has just moved on to a more demanding job, and after a while, they get chased by a “double” who may or may not be the product of their imagination… 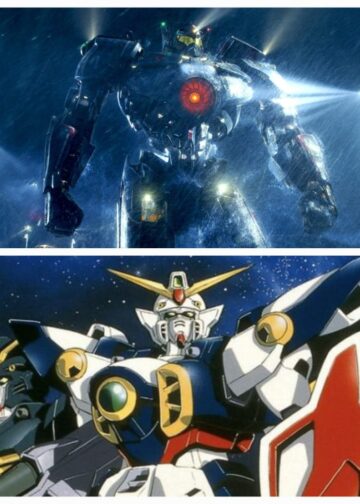 Mecha anime-themed is one of the most popular subgenres in the anime industry. “Pacific Rim” movie is of course derivative of many mecha anime, from “Evangelion”, “Mazinger Z” and “Gundam,” but Gundam Wing is the series which Pacific Rim director Guillermo del Toro has clearly expressed his love for. So, undoubtedly Pacific Rim movie may be Based on or at least influenced by Gundam anime series. 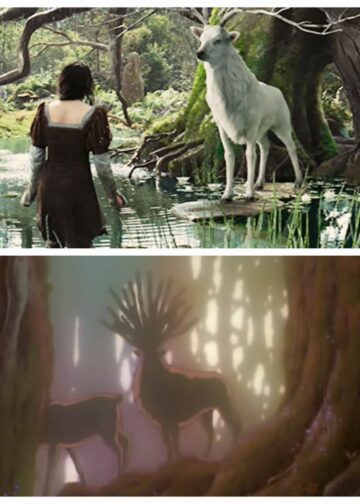 Both Films aren’t all that similar, but during watching Snow White and the Huntsman, you will stumble upon a scene that will remind you of the same exact scene used in the anime movie Princess Mononoke.

The Matrix – Ghost In The Shell 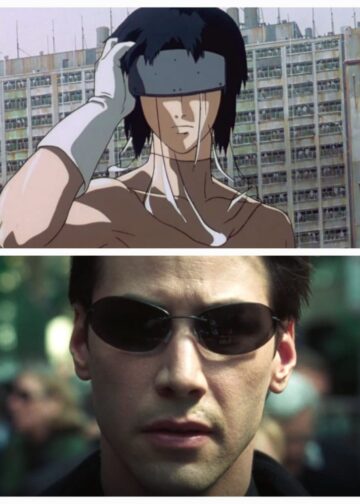 Directors Wachowskis didn’t hesitate to express their love for the Ghost in the Shell anime movie! They even revealed that they were really inspired by Mamoru Oshii’s Ghost in the Shell franchise, and sometimes they think about permission to make a live-action of GTS from the Author. Therefore, both the Japanese anime and the Hollywood movies are amazing to watch, so go watch them and have some fun bro! 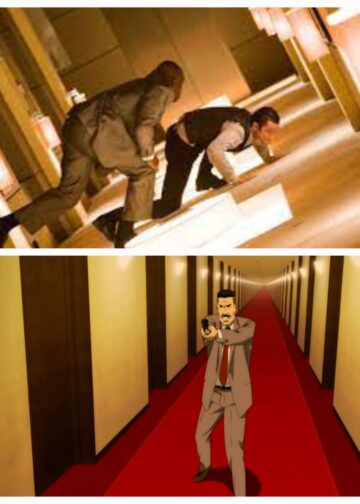 First of all, it is obvious that the overall ideas behind Inception were actually ‘inspired’ by the Japanese anime, Paprika, and even the director Christopher Nolan, admitted the use of Paprika as an inspiration. But some-others claims that the plot also bears spooky similarities, I love Paprika, and Inception even more. I know the comparison is shocking, but definitely, both shows are worth watching. This Hollywood film is totally one of the greatest movies of all time that was inspired by an anime project! 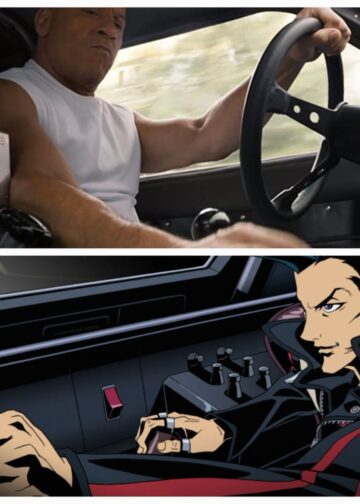 Redline is a science fiction auto racing anime film by Madhouse. A daredevil driver (Takuya Kimura) falls for an alluring woman (Yû Aoi) as he tries to win a race that occurs only once every five years. Due to the series’s long-term in production, Redline became infamous.

Rumor has it that many scenes in fast & furious were being adapted from redline anime. Fast and Furious is one of the best movies of all time and it’s an honor to be inspired by an anime series. We are not totally sure about that, but what matters the most; it’s exciting to see these two shows. 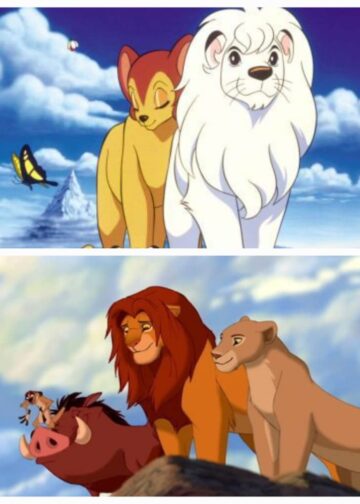 Among the best American Hollywood movies inspired by anime is The Lion King film, which was accused of intellectual theft by the creators of the animated Kimba the White Lion. The animator Tom Sito denies it and says he might have been unconsciously inspired by it. Seriously! who will believe you master Tom?

Just look at the similarities between both shows and decides for yourself. Furthermore, Fred Ladd, the executive producer of Kimba The White Lion, on seeing The Lion King for the first time “I said to my wife, ‘Don’t tell me that the father lion is going to appear in the clouds.’ And he did! I couldn’t believe it!”.

Atlantis: The Lost Empire – Nadia: The Secret Of Blue Water 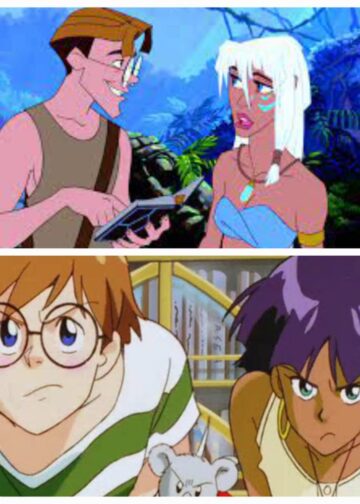 “Atlantis: The Lost Empire”, is a Disney American animated movie released on June 15, 2001, which is quite similar to the Japanese anime movie “Nadia – The secret of blue water” produced by studio Gainax, which was released in 1991.

It is obvious that both movies are alike since both films are ripping off 100 years worth of pulp cliches, both Atlantis and Nadia cite 20,000 Leagues Under the Sea by Jules Vernes, and both features similar character design.

Therefore, it’s just so similar to what happens between the Kimba and the Lion King films. Hence, the weird thing is that The Atlantis team denies any knowledge of Nadia!! 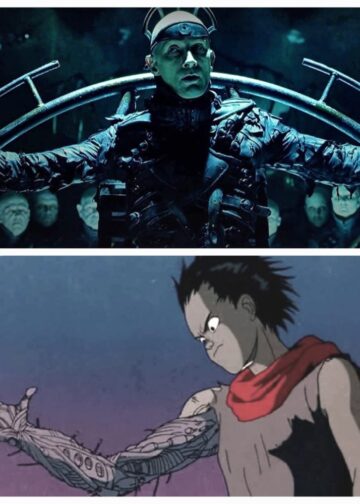 Next up, among the best Hollywood movies inspired by anime is the famous Dark City, which is a 1998 American neo-noir science fiction film, directed by Alex Proyas. Proyas stated that the end battle of his movie is a “homage to Otomo’s Akira film”.

But for many, it wasn’t only the end battle that is similar to the Japanese masterpiece Akira, as Mr. Proyas used so many things from that popular anime movie. No one argues that the original anime and manga project became iconic hits worldwide and that the Dark City’s climactic battle is an obvious nod to the final battle in Akira. Therefore, nothing beats originality! 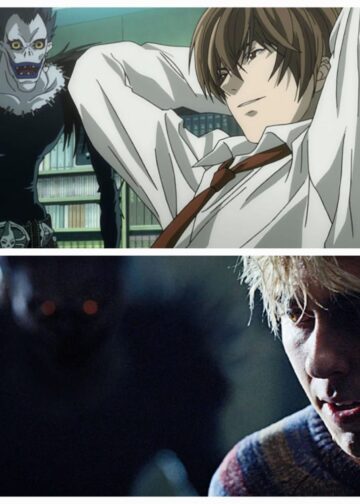 There were already so many announcements revealing that the Death Note anime and manga series is planned to have a Hollywood adaptation as soon as possible.

Now, we have this American version produced by Netflix already out. The US adaptation came out in 2017 through Netflix, and William Dafoe plays the role of  Ryuk. It seems that Netflix bases this adaptation on the popularity of the series, without even thinking that it may ruin the whole hard work that the Japanese staff had put into it to create such a masterpiece that cannot be forgotten.

Finally, all I can say is that this is one of the worst American Hollywood movies inspired by anime of all time! Therefore, we hope that there will be a good and decent adaptation in the future since the Death Note series deserves more respect!! 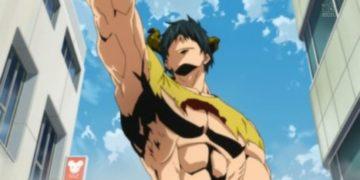 Anime with overpowered mc: Which anime have overpowered main characters who are capable of defeating any opponent that stands in...