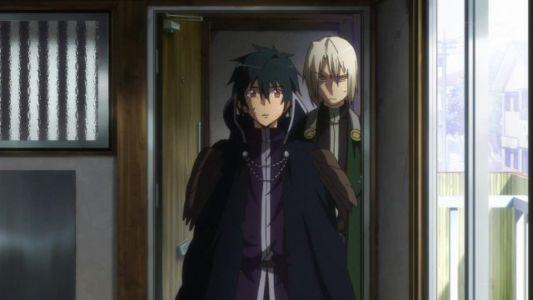 Today we are not focusing on the well-known isekai-themed anime which showcases characters who transport from our own world into another world that consists of mystical creatures, demons, magic, elves, and fantastic lives. Hence, we will do the exact opposite! which is showing you some anime series that are labeled as reverse isekai anime series.
So let’s know the best reverse isekai anime shows out there! that follow this plot formula (anime characters coming from another world to our real world). 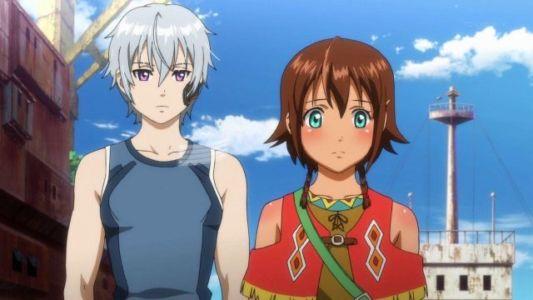 Kicking off the list of the best reverse isekai anime with Suisei no Gargantia, set in the distant future, where the majority of humans have left the Earth. There, now the Galactic Alliance of Humanity his mission guide exploration and ensure the prosperity of mankind. However, a significant threat arises in the form of strange creatures “Hideauze”, resulting in an interstellar war.

Armed with Chamber, an autonomous robot, 16-year-old lieutenant Ledo of the Galactic Alliance joins the battle against the monsters. But, Ledo loses control during the battle and is cast out to the far reaches of space. On the blue planet, Gargantia comes across Chamber and retrieves it from the ocean.

Mistaking their actions for hostility, Ledo sneaks aboard and takes a young messenger girl named Amy hostage. Only to realize that the residents of Gargantia are not as dangerous as he had believed. Unable to communicate with his comrades in space, Ledo acclimates to a new lifestyle. But his peaceful days are about to be short-lived. 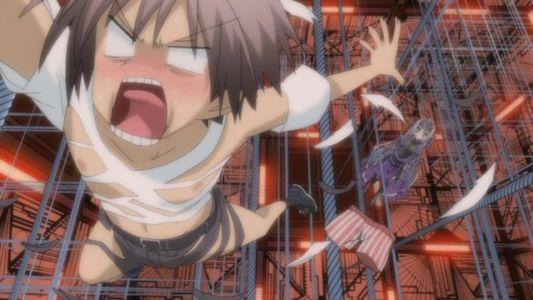 Not every zombie anime depicts those stories as horrific, monstrous, and human-eating beings.

This reverse isekai anime story starts on a night while walking home from the convenience store, regular high school boy Ayumu Aikawa is killed by a serial killer He is just as suddenly brought back to life by a necromancer coming from another world a.k.a Eucliwood Hellscythe. One small caveat: he’s not a human anymore, now a zombie.

Things get even weirder for him when he accidentally steals a magical girl’s uniform, and thus her powers! Haruna, the ex-magical girl, orders him to fight evil creatures in her place until they can figure out a way to get her powers back to her. Does it seem that life is just going to get stranger and stranger for poor Ayumu from here on out in Kore wa Zombie desu ka? 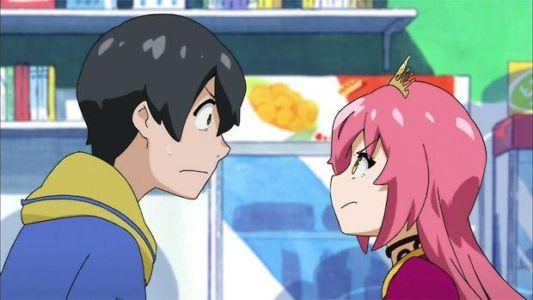 Sengoku Collection is a really good anime that showcases the story of many samurai who are accidentally removed from a parallel world inhabited by popular historic characters. Hence, Unlike the historical samurai period, we are familiar with, all people from this unique world look like high school girls. Coming from the medieval era and finding themselves totally amazed by everything they encounter in modern-day Tokyo, the girls become best friends through their adventures. 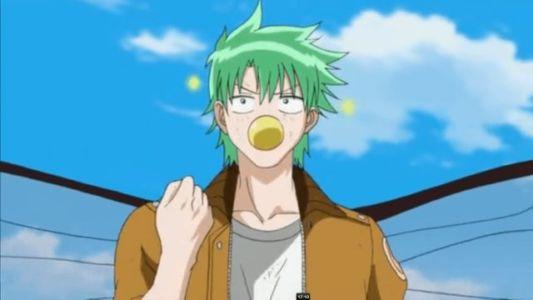 Beelzebub is an action reverse isekai anime that follows Tatasumi’s life with the demon child, coming from another world.

First of all, Tatsumi Oga is a first year at “Ishiyama High” the school for delinquents. One day while sleeping next to a river he sees a man floating down it, he pulls him to shore and the man splits in half revealing a baby boy.

This boy is the son of the demon king and he has been chosen as the one to raise it with the baby’s demon maid Hilda. Now the two combine their powers to face everything at the delinquent school. 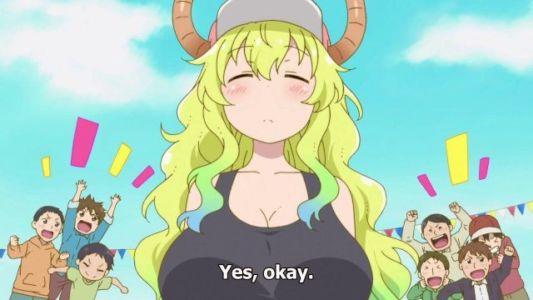 As Kobayashi sets off for another day at work, she opens her apartment door only to be met by an unusually frightening sight—the head of a dragon. The dragon immediately transforms into a cute, busty, and energetic young girl dressed in a maid outfit, introducing herself as Tooru.

It turns out that the stoic programmer had come across the dragon the previous night on a drunken excursion to the mountains. Since the mythical beast had nowhere else to go, she offered the creature a place to stay in her home.

Thus, Tooru had arrived to cash in on the offer, ready to repay her savior’s kindness by working as her personal maidservant. Though deeply regretful of her words and hesitant to follow through on her promise, a mix of guilt and Tooru’s incredible dragon abilities convinces Kobayashi to take the girl in. 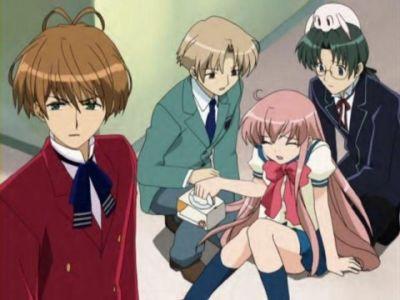 This is an underrated anime with a reverse isekai theme. The story highlight Loki, the god of mischief has been exiled to the human world due to what appears to be a bad joke.

In the human world, he’s forced to disguise himself as a child. Now, in order to return to the world of gods, must collect auras of evil that take over human hearts, and to do so! he runs a detective agency.

Loki, will soon will meet a human girl named Mayura who is a maniac for mysteries, and she soon helps him out in her own way. However, soon other creatures from the world of gods begin to appear, with the intent to assassinate Loki for unknown reasons. 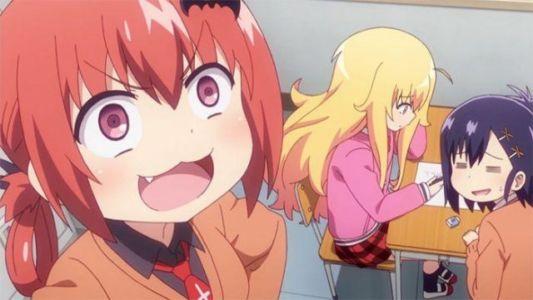 Gabriel Dropout is a great reverse isekai anime that follows four friends’ daily lives as they cannot cope with what it truly means to be a demon or an angel.

For centuries, Heaven has required its young angels to live and study among humans in order to become full-fledged angels. This is no different for top-of-her-class Gabriel White Tenma, who believes it is her mission to be a great angel who will bring happiness to mankind.

However, Gabriel grows addicted to video games on Earth and eventually becomes a hikikomori. Proclaiming herself a “Fallen Angel,” she is apathetic to everything else—much to the annoyance of Vignette April Tsukinose, a demon whom Gabriel befriended in her angelic early days on Earth. 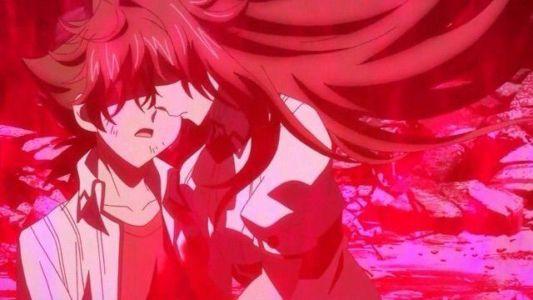 High School DxD is known for being an awesome harem anime with op mc, and reverse isekai girls, especially the gorgeous Rias Gremory.

The story follows the student Issei Hyoudou who is a pervert. He does nothing productive with his life, peeping on women and dreaming of having his own harem one day. Things seem to be looking up for Issei when the pretty rias ask him out on a date. Although she turns out to be a fallen angel who brutally kills him!

However, he gets a second chance at life when Rias Gremory, who is a top-class devil, revives him as her servant. Now, Issei must train and fight in order to survive in the violent world of angels and devils. Any given adventure leads to many hilarious and epic moments with his new comrades. All the while keeping his new life a secret from his friends and family in High School DxD! 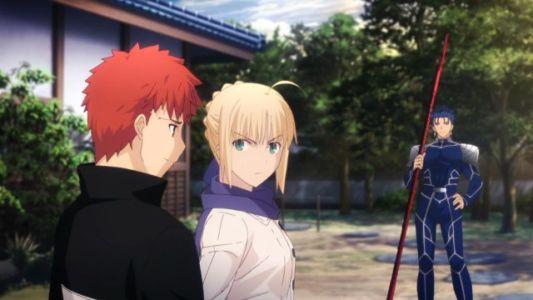 When we talk about reverse isekai anime we must certainly mention Fate Stay Night, why? the answer is in the following summary. After a mysterious inferno kills his family, Shirou is saved and adopted by Kiritsugu Emiya, who teaches him the ways of magic and justice.

One night, years after Kiritsugu’s death, Shirou is cleaning at school, when he finds himself caught in the middle of a deadly encounter between two superhumans known as Servants. During his attempt to escape, the boy is caught by one of the Servants and receives a life-threatening injury.

Miraculously, he survives, but the same Servant returns to finish what he started. In desperation, Shirou summons a Servant of his own, a knight named Saber. The two must now participate in the Fifth Holy Grail War, a battle royale of seven Servants. And the mages who summoned them, with the grand prize being none other than the omnipotent Holy Grail itself. Also, Fate/stay night follows Shirou as he struggles to find the fine line between a hero and a killer. Then, his ideals clash with the harsh reality around him. Will the boy become a hero like his foster father, or die trying? 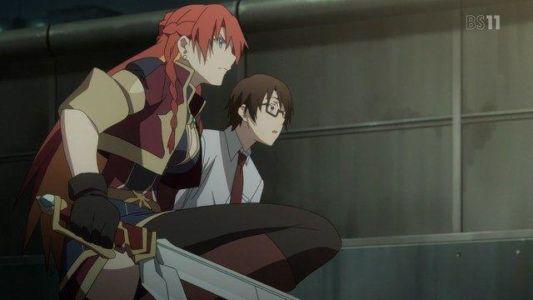 In Re: Creators, Humans have designed countless virtual worlds, and games—each one is born from the unique imagination of its creator. Souta Mizushino is a high school student who aspires to be such a creator by writing his own light novel. One day, while watching an anime for inspiration, he is unexpectedly transported into a fierce fight scene.

When he returns to the real world, he realizes something is amiss: The anime’s headstrong heroine, Celestia Yupitilia, has somehow returned to him. Later, He will realize that some other fictional characters start appearing in the world. Therefore, those characters consist of A princely knight, a magical girl, a ruthless brawler, and many others who now walk on the streets of Japan. However, the most mysterious one is a woman in full military regalia, who knows far more than she should about the creators’ world. Despite this, no one knows her true name or the world she is from.

Hataraku Mou Sama is the best reverse isekai anime you will ever see! The story follows Devil King Sadao, who is only one step away from conquering the world when he is beaten by Hero Emilia and forced to get transported to our own world: modern-day Tokyo.

As “conquering the world” are the only skills the Devil King possesses—and is obviously unnecessary in his new situation. Hence, Now Sadao must disguise himself in a human form while working as a freeter to pay for his living expenses!