Hey Everyone, welcome to this recommended anime list that depicts The 10 Best Japanese Anime series Where a Badass Girl Fall in Love with a Shy Honest Boy.

Yeah, From the title, it is obvious  that we are highlighting the best tv shows that depicts romantic relationships in anime. however, those series ain’t solely romance-themed, as you will come across various genres be it action, supernatural, isekai, magic, and much more themes.

So yeah! here we go to make you discover the best anime tv shows with a badass girl that loves a shy Boy.

Ergo Proxy is really a good underrated anime that you should watch, it has everything that makes a good anime, be it the amazing animation, the unique story, Ost, and characters development, specially the badass girl lead. i promise you that you will really like it.

the story depicts that Humans and androids live together in the city of Romdo, protected by a huge dome.

A young inspector named Lil Meyer from the Intelligence Bureau is going to investigate a series of strange murders that tarnish this paradise.

Soon a strange message appears calling for enlightenment. The town of Romdo, previously assisted by machines, will be affected by a strange “COGITO” virus. The hyper-formatted society will soon be deregulated and the masks will fall.

Because the city hides within it special and secret institutions where beings called Proxy are plunged in a deep sleep.

The murders which follow one another soon inaugurate their awakening.

Attacked by a mysterious attacker, agent Re-l Meyer will soon find himself at the center of an affair which is likely to topple all of Romdo’s society …

Read Also: 10 Best Anime Where Mc Turns Evil for His or Others Good 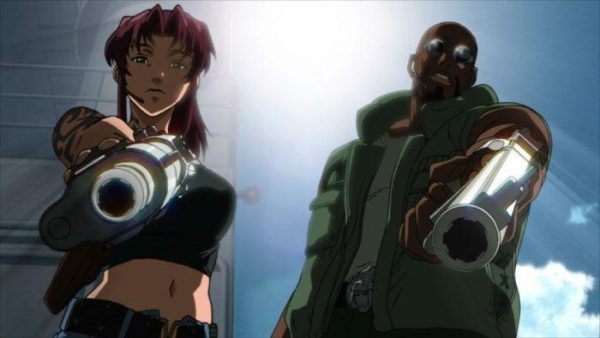 oh my god this one is so valid, and is one of my Favorited anime series of all time, The story is set in Roanapur within Thailand, a crime-ridden city where not even the authorities or churches are safe from the claws of corruption.

A haven for convicts and degenerates alike, the city is notorious for being the center of illegal activities and operations, often fueled by local crime syndicates.

Enter Rokurou Okajima, an average Japanese businessman who has been living a dull and monotonous life. he finally gets his chance for a change of pace with a delivery trip to Southeast Asia.

During his trip, he is captured by a mercenary group operating in Roanapur, called Black Lagoon, to use him as a bargaining chip in negotiations which ultimately failed.

Rokurou decides to join the Black Lagoon. Moreover, and In order to survive, he must quickly adapt to his new environment and prepare himself for the bloodshed to come. 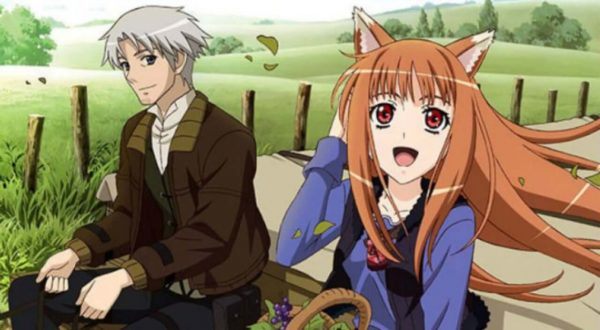 Lawrence is a street vendor who sells fur and trades. Because of his work, he returned to the small town of Pasloe at the time of the harvest festival.

The inhabitants are pagans and believe in a wolf deity that is named Horo. Legend has it that a pact between men and wolves was made to ensure the proper mowing of wheat when it has reached the expected maturity.

However, due to the new methods invented, the inhabitants of the village no longer have any difficulty in mowing wheat.

They ended up no longer taking the legend seriously and no longer really believing in the existence of Horo.

As he prepares to leave the village, Lawrence discovers in the back of his cart a young woman with wolf ears and tail. The latter then presents herself as the deity of the place and, since the inhabitants no longer seem to need her, asks Lawrence to take her with him.

The Anime depicts A new partnership between a honest boy and a badass wolf girl is then formed, allowing these two very different characters to understand each other and even romance will sparkle love ideas between them . 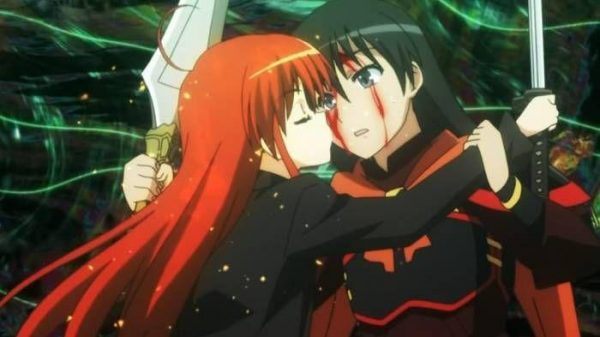 Yuuji, an ordinary high school student, sees the world congeal around him as he quietly returns from school during a two monster attack.

These monsters devour humans after transforming them into soul particles. luckily, the Anime main character Yuuji is rescued by a badass girl with purple eyes and hair who restores missing humans.

He discovers that he is already deceased and has been replaced by a torch, a temporary substitute soul, merely a scrap of memory waiting to be extinguished.

Koyomi Araragi, a student, manages to survive a vampire attack with the help of Meme Oshino, a strange man living in an abandoned building.

Although saved from vampirism and now a new man, many side effects like superhuman healing abilities and improved vision still remain.

However, Araragi tries to live the life of a normal student, with the help of the class representative, Tsubasa Hanekawa.

One day, when his comrade Hitagi Senjougahara falls on the stairs and Araragi catches her in mid-flight, he realizes that this young woman is abnormally light.

Despite Senjougahara’s protests, Araragi insisted on helping him, deciding to enlist Oshino, the man who had once helped him out of his predicament.

Bakemonogatari follows the story of Araragi, a “ordinary human” and Hitagi the badass girl, wanna know more go watch the series because it really worth your time. 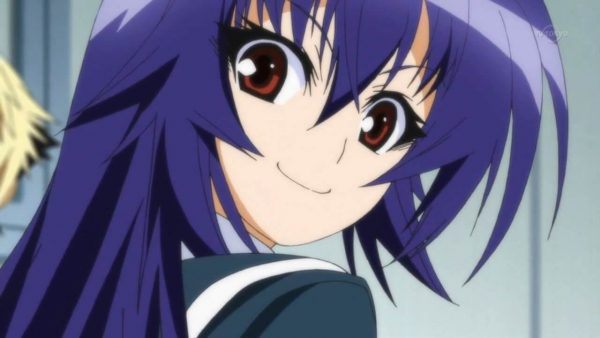 This Anime is So Good! it focuses on Medaka, a Badass Girl and A freshman of Class 13 and known that she is an excellent academic student, and dream to make others happy.

So when she runs for Student Council President of the prestigious Hakoniwa Academy, winning the election with 98% of the votes is only to be expected.

She thought of putting a “Medaka Box,” a suggestion box allowing students to submit any kind of request for assistance, or problems that need to be solved.

However, the two are about to find out that helping others may be a lot harder than they think as they begin to uncover a devastating plan centering on the academy and even Medaka herself!

Check Also: The 10 Best Anime where the MC isnt Afraid to kill 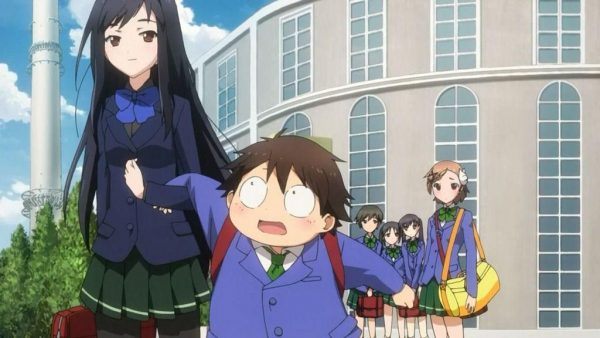 In 2056, the world has changed. Everyone now uses a portable terminal called Neuro-linker, allowing them to be permanently connected to virtual networks.

But some things do not change. There are always children who serve as a scapegoat for others. Haruyuki, a small and obese schoolboy, is a child who suffers from this persecution.

To escape his sad daily life, Haruyuki regularly spends time on a local network, playing and excelling at a game of squash.

the anime follows the life of Haryuki, that will change when Kuroyukihime, the most popular prettiest and badass girl in school, introduces him to a mysterious program called Brain Burst and a virtual reality called Accel World.

The good magic anime is set At Tougetsu High School, where Takamiya Honoka, an ordinary shy boy, has to put up with sitting in class right next to Kagari Ayaka, the most badass, prettiest, and popular girl in all of the high school.

When they never spoke, a day comes when Honoka finds himself in danger of death, while taking out the trash he looks up to see a school building falling on top of him! and Ayaka saves him at the very last moment.

The latter is, in fact, the fire princess witch and must protect Honoka, holder of the “white matter” without her knowledge on which the fate of the world depends.

It turns out that Ayaka is a fire witch and there are other witches in the world who want to capture Honoka and use him for the power that he possesses inside of him.

The Story follows the reserved shy boy Yukitero Amano, a high school student, who spends his day writing a diary in his cell phone, and occasionally talking to his imaginary friend, Deus Ex Machina, and Mur Mur.

Deus turns out to be the Lord of time and space, and Mur Mur is his servant.

Revealing himself to be an actual entity, Deus grants Yukiteru a “Random Diary,” which shows highly descriptive entries based on the future and forces him into a bloody battle royale with 11 other holders of similarly powerful future diaries.

Future Diary anime series follows Yukiteru, who must find and kill the other 11 in order to survive, while teaming up with the badass girl Yuno Gasai, a Yandere insane stalker who deeply loves him, and would do anything to guarantee his survival.

1. Darling in the Franxx: 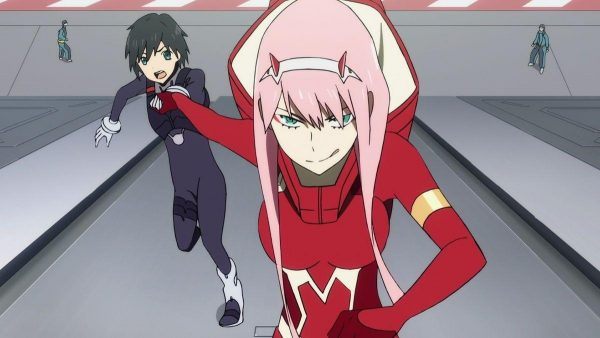 The story takes place in a universe where the Earth is nothing more than a huge desert swept by the winds. To survive, humans have built immense and mobile ecosystems, protected by a dome and called “Plantation”.

But these structures, also sheltering the cities, are regularly threatened by the Kyôryû, extremely dangerous creatures attracted by the materials drilled by the Plantations.

The FRANXX, mobile units controlled by two pilots, are the only effective weapons against the Kyôryû. Unfortunately, they are rare because the pilots, always a man and a woman, must be perfectly synchronized to control them.

Hiro, or Code 016, was trained to become a pilot in Plantation 13. however, he was never able to coordinate with his partner and lost all hope.

Until the day he meets the most badass anime girl ever Zero Two, a strange young half-human, half-kyôryû girl with whom he is able to pilot.