Welcome to This Amazing top 5 non-Ghibli Anime Movies list, which includes only the Greatest Anime films that Japanese animation has produced through history.

We Compile This List By Browsing The highest-ranked and prised Anime Movies of All Time that are non-Ghibli production.

probably, Japanese culture fascinated us, and the artwork and more mature content that anime promised instantly grabbed the attention of our teenage selves.

so without further ado, We present the 5 anime movies that most directly influenced our love of the genre.

If you’re old enough to remember Streamline Pictures, these selections should likely resonate with you. The first anime I ever watched was the original 1985 Vampire Hunter D.

Within the first few minutes, I was hooked.

The movie is an anime classic, featuring grotesque monsters, harsh violence, and even nudity.

The novelty of seeing nudity in animated form was jarring, but after a few more films under my belt, it started to feel weird if an anime movie didn’t feature nudity.

In fact, every movie on my list has both graphic violence and at least some nudity.

The characters from legendary artist Yoshitaka Amano were greatly altered to suit the animation, but are clearly evident in their designs.

#4 Fist of the North Star Ratcheting up the violence to absurd levels;

Fist of the North Star was the film adaptation of the manga and TV series of the same name.

The story was bonkers for anyone coming in with no knowledge of the franchise, but it was certainly entertaining.

Imagine the combination of Mad Max with *Ricky-Oh: The Story of Ricky” and this is what you’d end up with.

#3 Ghost in the Shell Ghost in the Shell is an absolute anime classic, garnering enough notoriety to earn a live-action US-based adaptation starring Scarlett Johansen in the lead as Motoko.

Not only does the film sport some slick visuals and expertly choreographed action sequences;

the story is deep, nuanced, and presents some heady philosophy about what it means to be human. Ninja Scroll is an adventure following wanderer Jubei as he gets himself tangled up with the Eight Devils of Kimon.

a group of deadly villains who each possess bizarre supernatural abilities from a hulking man who can turn his skin to stone to a cruel necromancer who fills his reanimated corpses with gunpowder.

It is extremely violent and has several uncomfortable sex scenes; Of course, it would be Akira.

Arguably the greatest and most important anime movie of all time.

Akira follows a group of biker punks who get caught up in a government program that experiments on children in hopes to extract their psychic abilities.

Akira is largely credited with breaking anime into the West, as it actually received theatrical exposure in the early ’90s, with a theatrical re-release in 2001.

While I wasn’t able to attend the re-release, I do have a beautiful, rare poster from the showing in New York City.

I’ve watched Akira more times than any other anime film, so I can easily say it’s my favorite of all time. 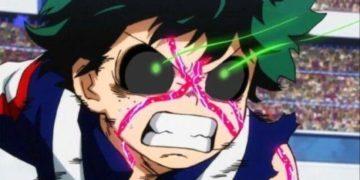