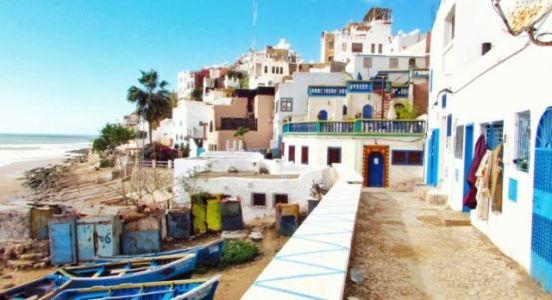 Traveling in Morocco – My Trip to Chefchaouen the Blue Pearl

Chefchaouen a rare pearl Hidden away in the Kif Mountains just a four-hour coach ride from Fes.

this was my ultimate goal from my travel through Morocco.

I was longing for seeing this majestic, amazing wonderful city with its walls, houses, pavements, everything covered in blue.

the truth is I’ve heard so many awesome stories about the trip to Chefchaouen from fellow travelers both inside and outside of Morocco and during my trip to chefchaouen.

so I decided to visit this blue pearl by myself and see its beauty with my own eyes.

Costing me only a very modest 9$, I took the earliest coach I could at 8:00 am in the hope of spending the most time during the day in Chefchaouen.

I heard stories of people getting a “Grand Taxi” there, but it’s only worthwhile when sharing a full taxi.

As I was going it solo, I decided to take the coach, which was very comfortable with aircon, reclining seats, an onboard toilet, and can I just say one of the most beautiful views I’ve ever seen outside a coach.

The green hills rolled for miles as we climbed higher into the Kif mountains, with shimmering blue lakes nestled in between the hills.

I had quite a late night in Fes the previous night so I had planned to sleep on the trip, but the view wouldn’t let me.

Instead of resting, I found myself staring out the window for the entire journey, fighting through the tiredness. As I stared at the view, a glimmer of blue buildings was in view, hidden away within the rolling hills and next to an imposing mountain.

As we got closer, the city was teasing me, showing bit by bit until it became clear that we had arrived.

Finally – My trip to Chefchaouen ended!

I collected my bag and ran to the taxi rank like a little-excited child, impatient to see the famous blue city and to be surrounded by it.

The city was split into two parts, the modern half with the bus station and taxi ranks which was a plain white and some blue, and the old traditional city which was layered in a pure blue coating.

Slowly, the taxi made its way through the tight roads, suddenly out of the blue (no pun intended), we were in the midst of the old city and I. Was. In. Awe. Blue as far as the eye could see. pot plants. walls.  arches. houses with blue windows with blue stone staircases leading up to them. everything is just Blue what an amazing view!

Even the ground was blue.  couldn’t get enough, I was almost dizzy from the sheer beauty of it all.

I walked through, eyes darting around because I simply didn’t know where to look. I didn’t even care where my hostel was.

you feel exhausted and drained from the trip carrying my rucksack through town but even so, all I wanted to do was explore this city forever, if I could.

Even the prospect of peppermint tea couldn’t hold me still – Eventually, I found my hostel and settled down as fast as I could.

Even my hostel was a tide of blue, even my room was blue!!

My hostel was called Dar Antonio which literally translates to Antonio’s House in Arabic (please correct me if I’m wrong!!).

I met with the owner, Antonio, and he told me of a view of the whole city which is breathtaking at sunset – the Spanish Mosque.

That would that evening’s exploration, and you won’t believe how gorgeous it is.

Awesome Scenery from my Trip to Chefchaouen the Blue Pearl, Morocco Traveling in Morocco: Essential Tips and Information Before your Trip

Travel To China: There is no doubt that traveling to China is a topic that…

The 10 Best Travel Apps You need Before your Trip! Nowadays traveling became easy to…

12 Trip Essentials to Pack for Traveling