Traveling in Morocco: Essential Tips and Information Before your Trip

Traveling in Morocco is a wonderful adventure that one can never forget, due to the beauty and many interesting things and places that this country offers.
Its visitors are warmly welcomed and appreciated, so that its tourists and visitors usually say about it, “One visit is not enough.”

Perhaps a trip there between markets, ancient cities, and coastal destinations will give you many unforgettable memories.

But there are things that you should know before traveling to Morocco, in addition to the best destinations offered by Bakabuzz in order to have a comfortable and happy trip.

Information and tips before traveling to Morocco:

One of the important things to consider when traveling to Morocco is currency and costs.
We tell you that there are many shops that accept credit cards, but most street vendors, small markets, and taxis are not. So, make sure you have a local currency that is “Moroccan dirham” as much as the costs you can spend.

One of the advantages of traveling to Morocco is the different languages spoken by Moroccans, including English, French, Arabic, and Berber.

You will also be able to communicate easily if you speak the English language that is commonly used, especially in large areas. You may need a translator in some rural areas of Morocco.

Best times for traveling to Morocco:

Moroccan food is a mixture of French, African, and Arabic kitchens, and uses many fresh fruits and vegetables. Couscous is the world-famous Moroccan dish.
You should also try mint tea, which is very popular with tourists and locals as well.

If you are in the markets or ancient cities of Morocco, you should learn how to bargain to avoid spending much of your money. Bargaining is part of Moroccan culture.

Try to lower the price offered to you by the seller, you can get a price of less than 25% of the price that was offered at the beginning.

Traveling to Morocco – The Best cities in Morocco you Should Visit:

We will show you the most beautiful destinations for traveling to Morocco: Moroccan cities whose beauty will surely motivate you to visit Morocco. 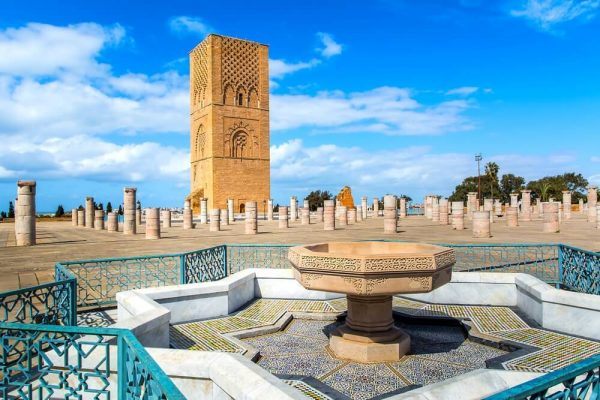 Let’s start off with the capital. Like most capital cities, It has two distinct main districts: the New Town and the Old Town.

The New Town is the perfect place to do some shopping and enjoy the warm weather at the city’s open-air bars and cafes.

The Old Town is packed with typical Moroccan markets and is a great place to explore, find some amazing bargains, and do some good old-fashioned people-watching.

You can visit some of the most important tourist attractions such as Bab Al-Ahad Square, and the Hassan Archaeological Mosque. 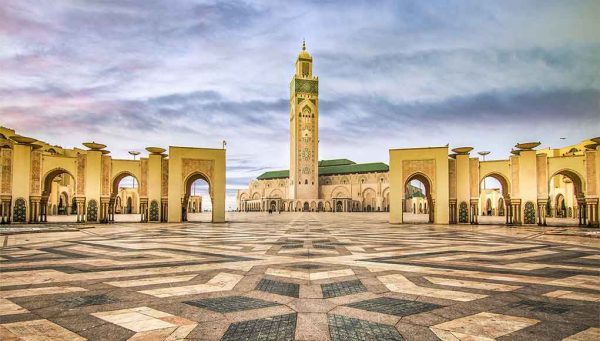 Casablanca is the commercial capital of the Maghreb, and it is the largest city in Morocco.

There are many high-end hotels, Mohammed V Airport, and many tourist areas such as: Ain Diab Corniche, the Hassan II Archaeological Mosque, Bab Marrakesh, Al-Habous, … 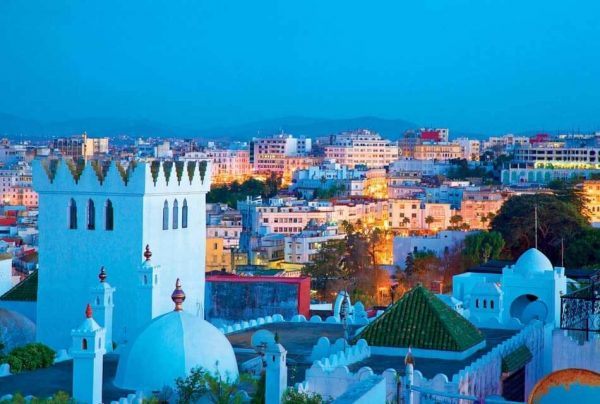 Tangier is located on the Mediterranean coast, and it is the gateway to Africa for those traveling by sea from southern Europe. It is distinguished by its history since ancient times until today, and it contains many antique fences.

We recommend visiting the Hercules Cave in Tangier, which is a myth and legend, as the entrance to the cave displays a number of traditional artifacts and artifacts. There, we recommend you take the stairs and enjoy the small inner waterfall, rock formations, and amazing statues. 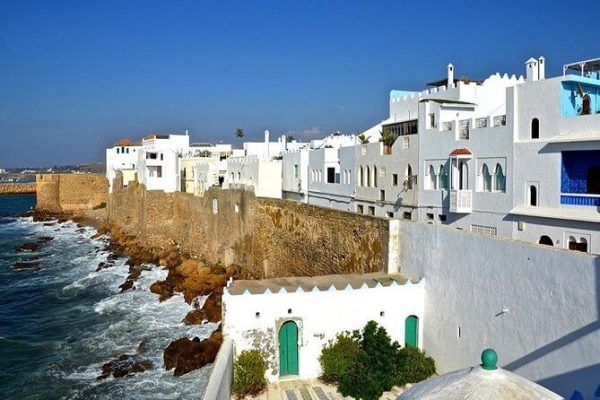 A gorgeous seaside town on the northern coast of the country, Asilah has a rich and varied history.

The city’s impressive ramparts are a relic of Portuguese colonial rule dating back to the 15th century.

Honestly, from the striking white-painted buildings to its beautiful coastline and the colorful murals adorning the city walls, Asilah is one of the unmissable yet frequently overlooked jewels of Morocco. 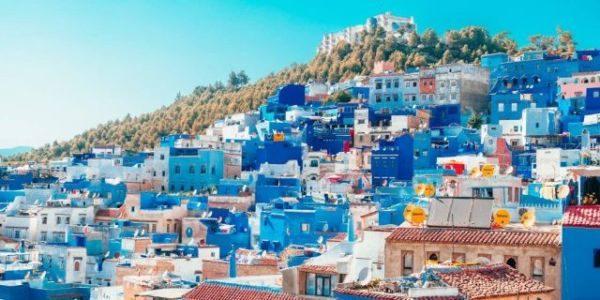 A charming city where blue color distinguishes its houses. It contains rugged mountainous terrain, and the presence of squares, mosques and the Kasbah, which are considered the nucleus of the original city.

Chefchaouen is famous for producing woven blankets and Moroccan handicrafts, which are very popular with tourists. So we made sure to place it in this article of traveling to Morocco. 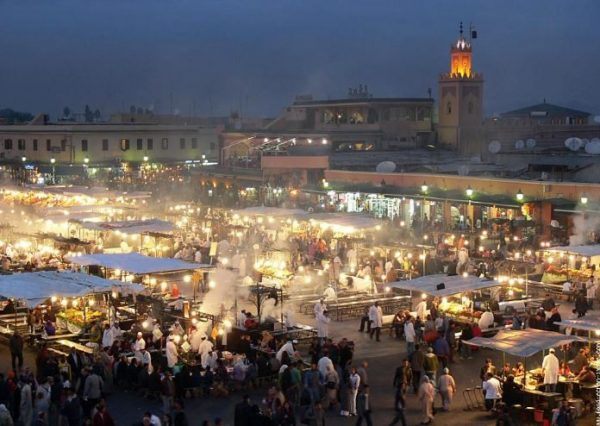 Marrakech is located at the base of the Atlas Mountains and is considered one of the important tourist cities in Morocco. It is also called the Red City because of its sandstone structure.
The most important tourist areas in this city: 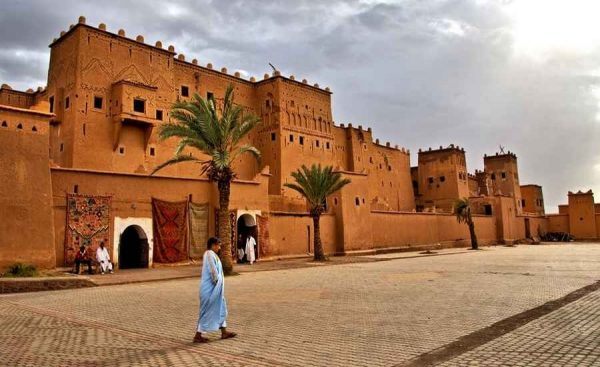 When you plan traveling to Morocco, the city called Desert Gate should be added to your list.

It is located in the southwest of the city of Marrakech. The city is famous for filming international cinematographic films in its aspects, such as Lawrence of Arabia, The Mummy, Kingdom of Heaven…

The town itself is notable for its numerous examples of beautiful Berber kasbahs, including the Ait Benhaddou, Atlas Studios… 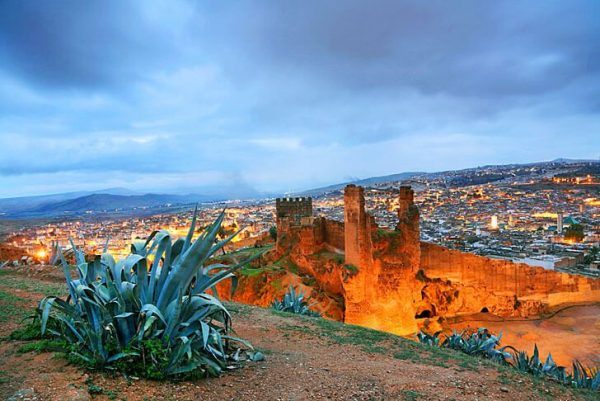 The ancient city of Fez was the former capital of Morocco and is now the scientific capital of the country.

It is characterized by the presence of doors and fences around the old city in addition to the historical mosques.

And we cannot forget schools such as Al-Attarin School and Al-Boanani School. 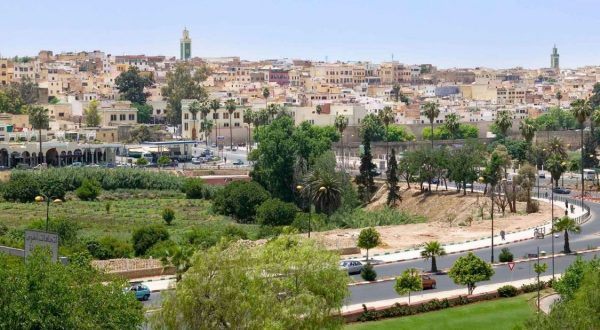 If you’re looking for a more relaxed Moroccan city break, We recommend you to visit the city of Meknes. It is smaller and more laid-back than Marrakesh and Fez.

Meknes was listed in 1996 on the list of the World Heritage of the Organization of Science and Culture of UNESCO as a unique Moroccan cultural heritage in the world, cannot be missed.

History buffs will love top attractions like the Royal Stables and the Museum of Moroccan Art (Dar Jamai), while the Roman ruins at nearby Volubilis are well worth a visit. 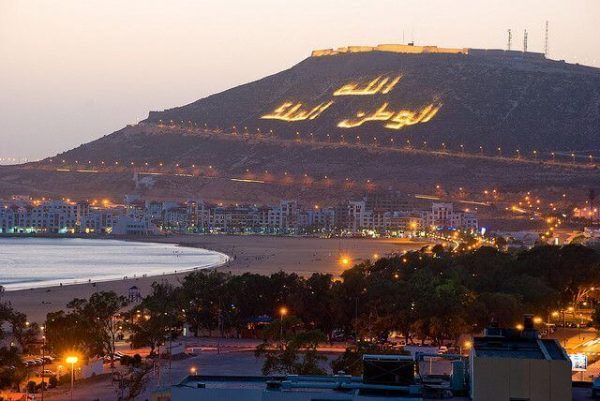 It is one of the most modern cities, destroyed by an earthquake in the 60s and rebuilt since then.
Among the most important places of tourism in Agadir: the Berber Museum, rest houses, cafes, and restaurants on the beaches… 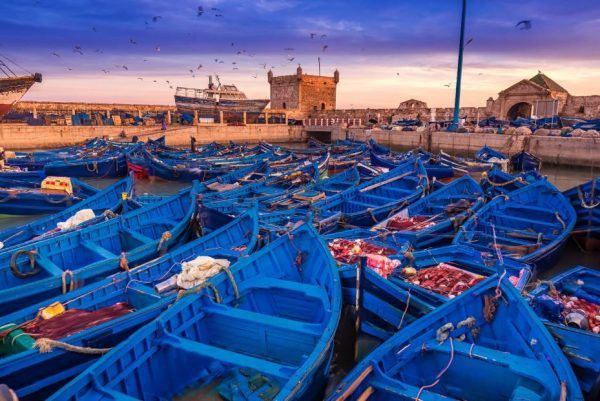 Essaouira is a small but beautiful coastal town with a quaint harbor, perfect for escaping the stress of daily life.

It is famous for its historic squares and walls, monumental buildings, and huge gates. The old city was classified as a World Heritage Site, according to UNESCO in 2001.

Essaouira is known for its quality seafood restaurants and hosts the three-day Gnaoua World Music Festival in June. 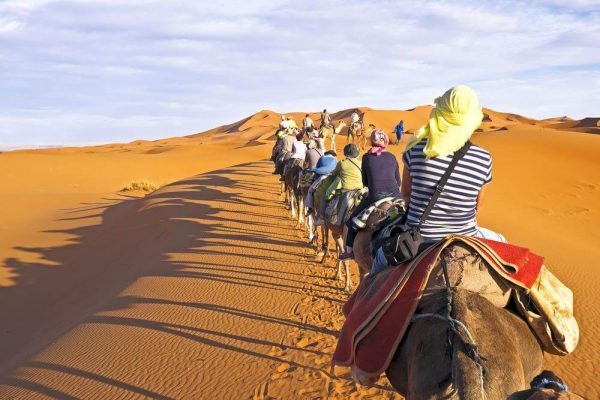 For a taste of something different, head out to the edge of the Sahara sand dunes to an area known as Erg Chebbi, in southeastern Morocco, near the border with Algeria.

Many operators offer camel safaris, which last anywhere from a few hours to several days.
Adrenaline junkies can also sign up for quad bike tours, sand-boarding, and sand-skiing.

See Also: The 10 Best Travel Apps you Must have on Your Phone Now!

Mount Toubkal is the highest mountain in Morocco, with a height of 4,167 meters, and it is part of the High Atlas Mountains. The top of the mountain offers wide horizons with stunning views of the surrounding areas. 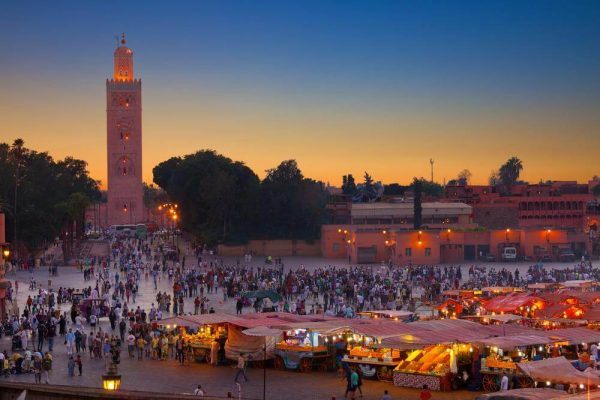 Jemaa el-Fna is the beating heart of Marrakesh and its most visited and vital destination by tourists.
The highlight of this Jemaa El-Fna square in the evening is the presence of storytellers, magicians, and street vendors with dozens of food stalls… 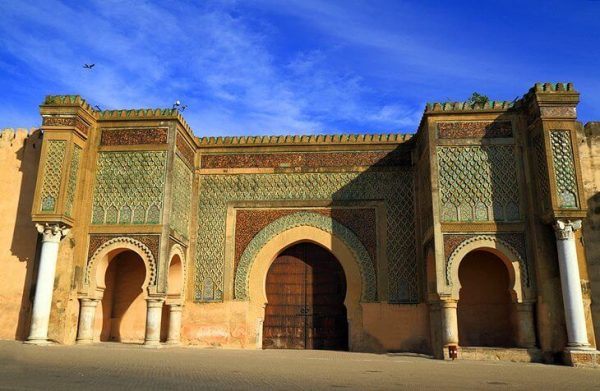 You can visit the gate in the evening to take a group of the most beautiful pictures of the magnificence of the gate in low light. Then you can wander through the small maze of Meknes in the amazing old city. 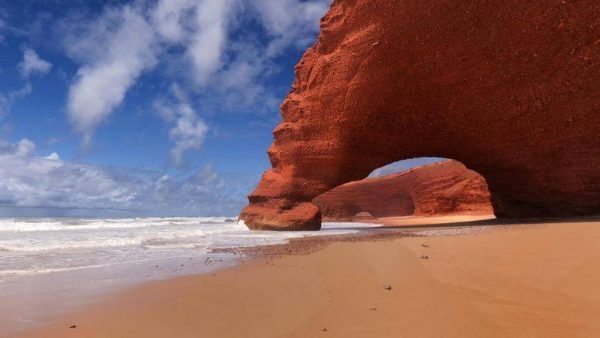 Sidi Ifni is warm all year round, the atmosphere is friendly and upbeat, and the beaches are absolutely beautiful, especially at the iconic Legzira Beach. 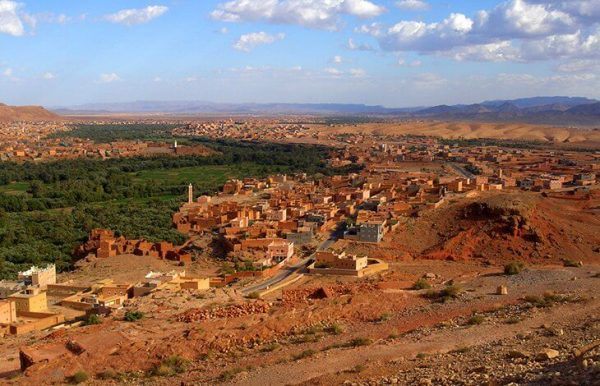 When traveling in Morocco you should not miss a trip enjoying great options for hiking and discovering the scenery of lush fields and orchards sandwiched between stunning cliffs. 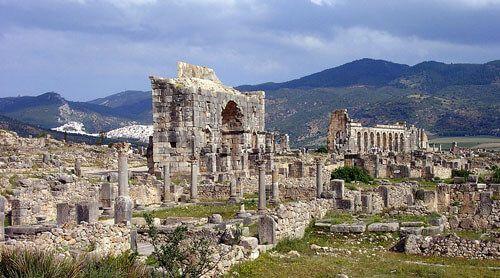 The ruins of Volubilis in Volubilis attract many visitors from all over. It is included in the list of UNESCO’s heritage and archaeological sites.

Aït Benhaddou the majestic is located on a historical castle near Ouarzazate on the outskirts of the desert. The picturesque village included in the list of UNESCO has been used as a location to shoot a number of films.

Check Also: Best 20 Tips for Traveling Europe that you Should Know 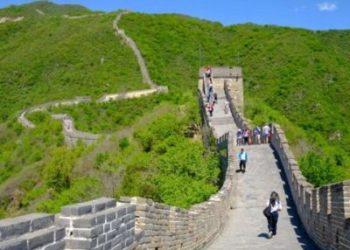 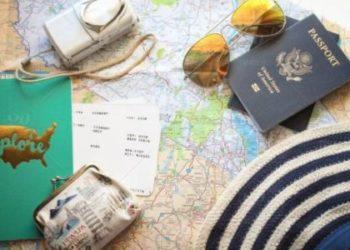 12 Trip Essentials to Pack for Traveling 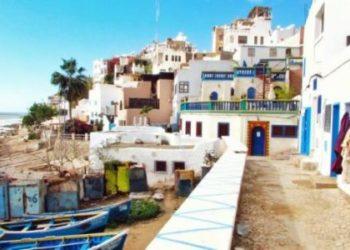 Traveling in Morocco – Trip to Chefchaouen the Blue Pearl 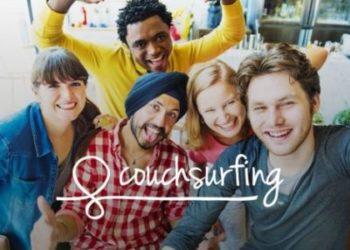 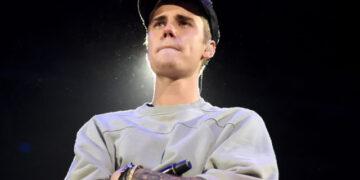 What is the net worth of Justin Bieber as of 2022? Justin Drew Bieber is a Canadian musician, songwriter, and...