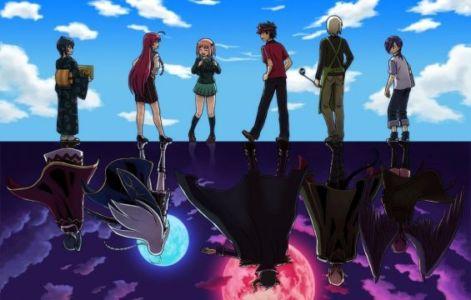 here is an isekai anime list of the best another-world themed series that deals with the topic of characters, monsters, demons, or just an outsider Mc, coming from another world to settle and live in our real world.

everyone loves isekai anime shows, it is not a so new genre, but it became a trend lately, and so many creators are competing to bring and create masterpiece, and great animated series out of this well loved genre.

but today’s list is focusing solely on those series that depicts a reverse theme, which is characters coming from another world to coexist, or invade our human world!

Let’s kick off our isekai anime list with this crossover tv show! Just, imagine a tv shows that is based on various characters from several isekai themed-anime series.

Well! luckily we have one called Isekai Quartet, that has everyone from deranged military girl Tanya Degurechaff of youjo senkai, and 16-year-old isekai protagonist Satou Kazuma of Konosuba, to expansionist overlord Ainz Ooal Gown and Re:Zero demon sisters Rem and Ram go on with their daily lives. Suddenly, a conspicuous red button begging to be pressed appears before them. Overcome by curiosity, the otherworldly characters push the button, sending them to an unfamiliar world.

With no way of escaping, the characters must lead a normal school life and make acquaintances with the others. One thing is certain: the classroom full of fan-favorite eccentric personalities never gets boring!

Sengoku Collection, is a pretty good show on our isekai anime list that depicts the tale of many samurai who are accidentally removed from a parallel world inhabited by popular historic characters.

Hence, Unlike the historical samurai period we are familiar with, all people from this unique world look like high school girls.

Along with the badass female mc, all the samurais Coming from the medieval era, are now totally amazed by everything they encounter in modern day Tokyo, and through their adventures they make friends and foes too.

Gabriel Dropout is a great reverse isekai anime which follows four friends’ daily lives as they cannot cope with what it truly means to be a demon or an angel.

For centuries, Heaven has requires its young angels to live, and study among humans in order to become full-fledged angels.

This is no different for top-of-her-class Gabriel White Tenma, who believes it is her mission to be a great angel who will bring happiness to mankind.

However, Gabriel grows addicted to video games on Earth and eventually becomes a hikikomori.

Proclaiming herself a “Fallen Angel,” she is apathetic to everything else—much to the annoyance of Vignette April Tsukinose, a demon whom Gabriel befriended in her angelic early days on Earth.

7. Gargantia on the Verdurous Planet

This is also a pretty good series on our isekai anime list that is also a mecha-themed tv show. Set In the distant future, a majority of humans have left the Earth.

The Galactic Alliance of Humanity his mission guide exploration and ensure the prosperity of mankind.

the anime mc, who is 16-year-old lieutenant called Ledo of the Galactic Alliance joins the battle against some threatening monsters. Ledo loses control during the battle and is cast out to the far reaches of space and fall into the blue planet.

Retrieved and saved from the ocean; and Mistaking the actions of those who saved him for hostility, Ledo sneaks aboard and takes a young messenger girl named Amy hostage.

only to realize that the residents of Gargantia are not as dangerous as he had believed. Unable to communicate with his comrades in space, Ledo acclimates to a new lifestyle. But his peaceful days are about to be short-lived.

6. Aesthetica of a Rogue Hero

This Magic Isekai Anime, follows several young school girls and boys who regularly transfers to a world of sword and magic called Alayzard.

Those who survives and return to their homeland are typically gifted with magic abilities.

An international training organization known as Babel protects these youngsters and trains them to proprely use their powers.

Here is another good anime that is so underrated, even-though its a long running one with so many episodes that offers everything that a good shows has to offers, the story is not really that isekai themed show! So, why is it here in this isekai anime list?

Simply because the enemies and also one of the main characters are creatures coming from another world and with their advanced technology known as “Neighbors”, are now invading the human dimension.

However, Humanity’s only hope is an organization called Border, a small army wielding advanced, specialized weaponry in order to fight the encroaching threat.

Here is another great isekai anime series that depicts the story of the Mc Kobayashi, as she sets off for another day at work, she opens her apartment door only to be met by an unusually frightening sight—the head of a dragon.

The dragon immediately transforms into a cute, busty, and energetic young girl dressed in a maid outfit, introducing herself as Tooru.

It turns out that the stoic programmer had come across the dragon the previous night on a drunken excursion to the mountains.

and since the mythical beast had nowhere else to go, she had offered the creature a place to stay in her home.

Thus, Tooru had arrived to cash in on the offer, ready to repay her savior’s kindness by working as her personal maidservant.

Though deeply regretful of her words and hesitant to follow through on her promise, a mix of guilt and Tooru’s incredible dragon abilities convinces Kobayashi to take the girl in. 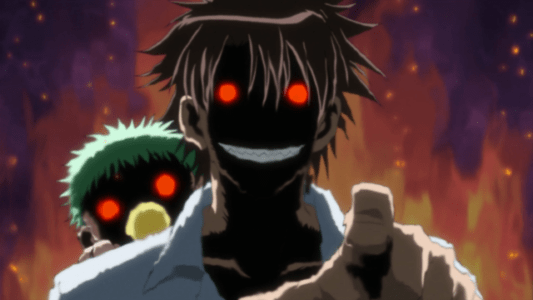 its a shame that most fans, dont know about this magnificent anime series, which is really good and has a unique story. frankly, its a masterpiece among our isekai anime list that really worth watching.

The story follows Tatsumi Oga, a first year in “Ishiyama High” the school for delinquents.nOne day while sleeping next to a river he sees a man floating down it, he pulls him to shore and the man splits in half revealing a baby boy.

This boy is the son of the demon king and he has been chosen as the one to raise it with the baby’s demon maid Hilda. The story of beelzebub anime series, follows the mc Tatasumi, as many demons breaks into his life, and now must take care of the demon child, therefore, the two combine their powers to face everything at the delinquent school.

Imagine somehow you will be living your everyday life with your Favorited anime characters, they became real people, now are your friends, and uses their powers to save you and the real world we live in too.

Yeah! this is the story of this amazing isekai anime series that depicts Humans, as now they have designed countless worlds—each one born from the unique imagination of its creator.

Souta Mizushino is a high school student who aspires to be such a creator by writing his own light novel.

One day, while watching an anime for inspiration, he is unexpectedly transported into a fierce fight scene.

When he returns to the real world, he realizes something is amiss:

the anime’s headstrong mc, Celestia Yupitilia, has somehow being isekaed to his real world.

Later, He will realize that some other fictional characters starts appearing in the world.

Therefore, those characters consists of A princely knight, a magical girl, a ruthless brawler, and many others now walk on the streets of Japan.

However, the most mysterious one is a woman in full military regalia, who knows far more than she should about the creators’ world. Despite this, no one knows her true name or the world she is from.

A demon Lord, badass, so overpowered is now working at Mcdonalds!! This is the story of this best reverse isekai anime that follows The Mc “Devil King Sadao”, who is only one step away from conquering the world when he is beaten by Hero Emilia and forced to gets transported to our own world: modern-day Tokyo.

As “conquering the world” are the only skills the Devil King possesses—and are obviously unnecessary in his new situation. Now Sadao must disguise in a human form while working as a freeter to pay for his living expenses!