Let’s move to a science anime show that is all girly until a zombie attacks the four female protagonists, who live in New York. We later discover that someone is raising the dead with the aid of biotechnology… Including the girls themselves! If they want the chance to know exactly how everything happened and if there is a way of becoming alive again, they will have to get involved in the battles against the undead.

On a planet devastated by global warming, a mysterious race called “The fleet of fog” attacks from the sea, isolating humanity and seeking to breed a more powerful version of themselves. Gunzo Chihaya, a human, and Iona, once part of the fleet of fog, join forces to end the oppression of humanity.

Originally created by Ark Performance, this anime has several sciences mixed in it, but mainly verses around naval vehicles engineering and the possible future of computer science. With constant battles and cute character design, this science anime has everything to be memorable.

Everything starts with Yuna and her boyfriend Tokyo having a date. She wonders how birds know what to eat. They later are involved in a traffic accident where she dies.

A mysterious boy called Chris makes a deal to revive her: she has to become an avatar and save the Earth. From that point, Yuna experiences every daily life activity in a whole new way that will leave you asking as many questions as her.

Although the topics are sometimes complicated and dense, the pace of the anime, the juxtaposition of 2D, 3D, and even real footage, the music by Yoko Kanno, and the engaging characters make Arjuna a masterpiece of storytelling.

Genetics has always made humanity wonder until which point we should apply it. The story of Ergo Proxy takes place in a futuristic scenario where humans are grown up in artificial wombs and there are mysterious and powerful creatures considered as Gods, called Proxies. Re-L Mayer, a policewoman, has the mission to follow the immigrant Vincent Law, who apparently has a close relationship with the Proxies.

20| Zankyou no Terror (Terror in Resonance)

We have more computer science and genetics with this anime. In an alternate universe, Tokyo has become the target of several attacks by a terrorist group called Sphynx. Detective Shibazaki is determined to unveil their true objective, which might be connected to a mysterious project involving orphan kids in the past.

We know that Zankyou no Terror is mainly about terrorism, but protagonists Nine and Twelve were perfectly well aided by their hacking abilities, plus a boost on their genetics. The never slowing down story, masterful animation, and music by Yoko Kanno made this thriller science anime an instant top-notch series. 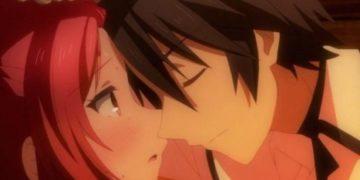 The Top 23 Romance Anime With Kissing Scenes you Need To See! Welcome anime fans, to this compiled list of...